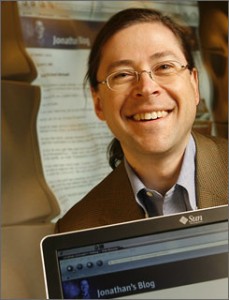 A confluence of postings brings me to the subject of today’s piece. The idea was sparked by a rant from a Silicon Valley product manager who bemoaned how inaccurate and lazy mainstream and citizen journalists can be:

“Itâ€™s a totally different world out there, assumptions I had about the knowledge level of the people I would be dealing with were completely wrong.”

Then there was Dave Winer’s recommendations last week to prepare for the dissolution of “centralized” journalism and rise of the distributed model:

“First, reform journalism school. It’s too late to be training new journalists in the classic mode. Instead, journalism should become a required course, one or two semesters for every graduate. Why? Because journalism like everything else that used to be centralized is in the process of being distributed. In the future, every educated person will be a journalist, as today we are all travel agents and stock brokers. The reporters have been acting as middlemen, connecting sources with readers, who in many cases are sources themselves. As with all middlemen, something is lost in translation, an inefficiency is added. So what we’re doing now, in journalism, as with all other intermediated professions, is decentralizing. So it pays to make an investment now and teach the educated people of the future the basic principles of journalism.”

Finally, the third piece of the puzzle surfaced with a mention of a Porter-Novelli/Cymfony study from last year on corporate blogging. Adweek’s Cathy Taylor cited it in her piece on the challenges for widespread adoption of the practice:

According to a study conducted late last year by Omnicom Group’s Porter Novelli and social networking analysis company TNS Media Intelligence/Cymfony, companies of more than 100 people were the least likely to have a CEO blogging, with public relations and product management executives being the most likely to post. As of last October, according to a Wiki tracking Fortune 500 bloggers, only eight percent of the Fortune 500 was blogging. “A lot of companies are really fearful of having blogs,” says Charlene Li, an analyst with Forrester Research. They have to, she adds, “overcome this huge perception of risk.”

OK. So we have three variations on the same theme:

At the risk of disintermediating the corporate PR function, we, as PR pros, should encourage product managers, lawyers and others who have expertise in their respective areas to play lead roles in the creation of content (oops, Dave, I mean journalism) — news/info that’s directly discoverable by the desired end audiences. Consider Sun’s Jonathan Schwartz (pictured above).

While I don’t think it’s realistic to put everyone through journalism classes, I do think that those with the most knowledge at an enterprise merit such training, and eventually a first-person voice in the PR mix. We, as professional communicators, should reassert our value as catalysts/facilitators/evangelists for making this filter-bypass a reality…if only for the reason that I’m tired of hearing clients complain that the reporter “got it wrong.”