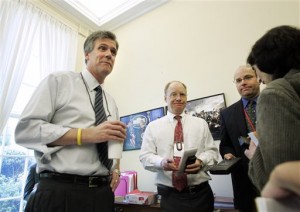 Last week, PR pundit Paul Holmes joined the chorus of media and PR watchers to weigh in on Tony Snow’s first day on the job. He cited the E&P story that reported the series of e-mails Mr. Snow fired off to the most assertive of the news organizations questioning the policies of this administration, e.g. CBS News, The Times, etc.

Perhaps, Mr. Snow should get acclimated to his new role before taking to task the administration’s adversaries from the fourth estate? Other than that, he seemed genuinely pleased by his new position of power, “You play a much more vital role working for a president than sitting behind a mike hurling stones.” (For now!)

Many outlets reported on Mr. Snow’s inauspicious first press briefing, which he thought would be less formal (and more congenial) by holding it in his office. Unfortunately, he misjudged the size of the gaggle, many of whom were left stranded in the hallway straining to hear what was being said.

“Can he be an effective advocate for the press, as he has promised, and still please the president’s people?

Will he be an active participant in policy debates, as he has been assured, or wind up out of the proverbial loop?

Will his relationships with Washington reporters, who generally like him, help with Bush’s coverage, at least at the margins?

And will he be comfortable defending policies — such as leak investigations that could lead to jail time for journalists — with which he might disagree?”

People always ask me whether a background in journalism is imperative for a career in public relations. Invariably, I say that understanding the news process is vital. However, there are far too many journalists who come to the task of PR with a “holier than thou/I can do it better” attitude. Most have an inherent aversion to pitching stories or being suppliant to their former colleagues.

From Mr. Snow’s new newsmaking perch, he’ll most certainly have a rude awakening trying to balance the daily message points with his former colleague’s demands that he be forthcoming and transparent. Already some have offered up their own “expert” advice.

As a career newsman, Mr. Snow may very well find the spin zone he’s entering too much for his editorial sensibilities to reconcile (his background at Fox notwithstanding). Ari Fleischer and Scott McClellan certainly sold their souls. It will be fascinating to watch the transformation of Mr. Snow in this position. His first decision: whether to ban cameras from the daily press briefings.