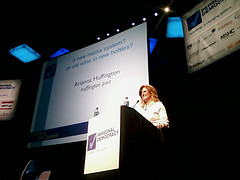 If given the choice, I’d rather go toe-to-toe with a smart, objective journalist than one who artificially seeks balance where balance may not even exist. In this way a cogent presentation of the facts may actually result in a fair hearing and an end editorial product that reflects reality. What more can we ask of the media filter?

Yesterday at the Personal Democracy Forum, Arianna Huffington delivered a “blistering indictment” of the “old” news media for its “…illusion of neutrality instead of ferreting out the truth.â€ Kit Seelye, the Times‘s former newspaper industry reporter who now toils on the political beat, writes in The Caucus blog:

“As an example, she [Huffington] pointed to the debate over global warming and said journalists stood in the middle presenting the public with two sides. ‘We wasted years debating in that way,’ she said. But the truth isnâ€™t splitting the difference, she said, and often ‘there is no other side.’â€

Of course, Ms. Huffington is right. Most journalists enter into a reporting situation either with a pre-conceived (and often implacable) story premise, or with the goal of obtaining balance even when the overriding evidence doesn’t warrant that both sides be equally represented.

I remember one persistent issue we faced in our eight-year effort to bring the National World War II Memorial to fruition. In spite of the unwavering support from millions of World War II veterans, one small, but aggressive group of antagonists identified two vets who didn’t support the Memorial’s proposed location. The group positioned its vets as representative of all veterans, and the media bought it hook, line and sinker — under the guise of journalistic balance.

As the growth of news commentary continues its suffocation of the media landscape, i.e., cable, talk radio and a myriad of opinionated bloggers, we cannot underestimate the value and importance of fact-based journalism that seeks to “ferret” out the truth. We need more journalists who strive for balance when it exists, and dismiss efforts by special interests who decry a lack of balance (i.e., the so-called “liberal media”) as a ploy to advance their unsubstantiated POV.

Come to think of it, I remember getting a call from Ms. Huffington, the columnist, during the WW II Memorial debate. She too bought into the anti-Memorial sentiment.