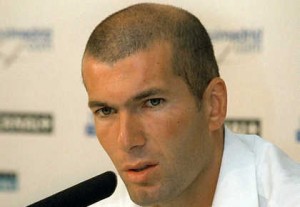 Beware the first write of history. I mean who didn’t think the Jon Benet Ramsey case was solved, only to learn what a delusional wacko the accused turned out to be? (Actually, he was a wacko regardless of his guilt or innocence.)

Today we learn that the famously-villified French head-butter Zinedine Zidane, was actually provoked by his Italian World Cup foe. It turns out that Marco Materazzi made a slur about Zidane’s sister prompting the head-butt seen round the world.

“Materazzi disclosed that after he held his opponent’s shirt, Zidane said: ‘If you want, I’ll give you the jersey later.’ ‘I responded that I preferred his sister, it’s true,’ Materazzi said. ‘It wasn’t something nice, true.'”

I’m not so certain Zidane can rebuild his tarnished image based on this new piece of information, but I know there are millions who might have more sympathy for him knowing what they now know.

My advice, Zinedine, take advantage of your new 15 minutes of global media interest to right this wrong — on every talk show available to you. Also, tomorrow’s re-match might be media leverageable.