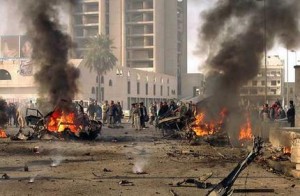 I had a chance this week to moderate a Business Wire-sponsored panel on the 100th anniversary of the press release. PR Week’s Julia Hood, The Economist’s Matthew Bishop and Shift PR’s Todd Defren, the social media news release meister, waxed poetic on the centennial of Ivy Lee’s first release (used to quell controversy over a train wreck).

The always astute Julia Hood chimed in by reminding the 200 attendees that the Declaration of Independence might just qualify as an early iteration of a press release, while Bishop took it a step further by citing an apple-promoting snake in the Garden of Eden. Anyway, the event wasn’t so much about the press release as much as about the changing dynamics of the public relations industry. An audio webcast of the event can be found here.

Frankly, it was a little disconcerting for me to see only a couple of hands rise when I informally asked the audience who knew: “John Battelle,” “AdWords,” “Technorati!” As many strides as we’ve made in the digital space, I suspect that the indsutry’s rank and file remain woefully in the dark. Who among us has actually read Naked Conversations, We the Media, The Search, The Long Tail — all books that directly speak to the paradigm shift in the very profession we have chosen for our livelihoods. What happened to the PR pro’s innate curiosity???

To remind us of just how social and consumer-generated media have changed the landscape, we only have to turn to the front page of today’s New York Times where we’ll find a piece on how ordinary Americans — not radical Islamists — are posting on YouTube graphic footage of U.S. troops being attacked in Iraq. This may be the last thing the America’s command-and-control crowd in Washington wants in the U.S. public domain, but there’s little they can do to paper over the truth.

“At a time when the Bush administration has restricted photographs of the coffins of military personnel returning to the United States and the Pentagon keeps close tabs on videotapes of combat operations taken by the news media, the videos give average Americans a level of access to combat scenes rarely available before, if ever.”

Then there’s the piece in today’s Washington Post that discusses how the blogosphere is increasingly used as a weapon to advance or derail political fortunes.

“Cumulatively, the stories highlight a new brand of politics in which nearly any revelation in the news becomes a weapon or shield in the daily partisan wars, and the aim of candidates and their operatives is not so much to win an argument as to brand opponents as fundamentally unfit.”

Perhaps the days of top-down control are waning, but the core competencies that define our profession — and the social media tools that bring them to life — are far from obsolete.