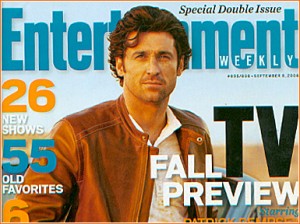 Business or glossy: magazines are the subject of today’s post. We took special notice of the recent bad news from circulationdom’s main keeper, the PIB. On average, the nine leading business books dropped an average of 10.3% in ad pages from a year ago.

“Only two magazines in the category are showing ad-page growth, Fast Company and Inc. Business Week is down 12.6 percent, Fortune is off 17.5 percent, and Business 2.0 has slumped 34.1 percent, leading to rumors of a shutdown.”

Media Life magazine published an insightful Q&A with Steve Greenberger, executive vice president and media director at SLG Advertising in Greenwich, Conn., who shares his take on what’s ailing the category, why Inc. and Fast Companyâ€™s gains may be fleeting, and the gadfly in the mix, Portfolio.

Separately, but not entirely unrelated, comes a curious piece from my old friend Brian Steinberg, former advertising reporter for The Wall Street Journal who now toils as TV editor for Ad Age. The headline of Brian’s piece, which tells of three planned half-hour ABC specials “previewing” the network’s fall lineup, raised my (and probably a few others’) eyebrows:

Now we all know how magazines benefit from (and covet) TV time to promote their own text and images about to hit newsstands. But, the idea that TIME Inc.’s popular titles Entertainment Weekly and People, along with an ailing TV Guide, would allow an organization on which they all report “use” them as promotional pawns in the run-up to the fall season, strikes me as, well, journalistically suspect:

“‘ABC has run previews of this sort before, but the magazine editors’ critiques bring a new element to the formula. The three shows “create positive word-of-mouth on upcoming series,” said Marla Provencio, exec VP-marketing, ABC Entertainment.

Spoken like a true marketing person. I just wonder how balanced these journalists will be in their “critiques” of the fall programming. Are they being paid for their appearances in these entertainment preview programs? And what benefit does the magazine really derive other than the magazine’s brand appearing in the super below their reporters’ cheerful faces? I mean they’re touting someone else’s product not their own.

In the end, it matters little since both parties to the promotion view this co-marketing deal as a win-win. Now let’s look for ads for the network’s new series in the magazines’ fall preview issues.