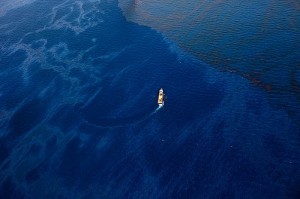 For those who follow this space, you will have noticed more than its share of posts about the trials and tribulations of a certain British oil company.

The significance of this story first struck me on April 27, a week after the explosion of Deepwater Horizon. I wrote:

“Today I’m keeping an eye on a developing story in the Gulf of Mexico. This is not your run-of-the-mill oil spill. It’s an environmental disaster that may very well rival Exxon Valdez.”

This news event earned its legs by virtue of its many visceral dimensions, the futility in finding a solution, and the incessant media dissection of the decisions the spill’s corporate and government “owners” have made along the way.

My musings on the topic have not resided solely on this blog. I’ve used a real-time micro-blogging platform to tweet and re-tweet PR-related gulf news. (Does anyone still call Twitter a “microblogging platform?”)

On May 9, I caught a tweet from HuffPost CEO Eric Hippeau (for whom I once toiled as part of the AOR for Ziff-Davis Publishing). It read:

I followed up with my own tweet, and included Wired‘s Jeff Howe (@crowdsourcing) who’s credited with coining the term “crowdsourcing,” and subsequently penned a book about it.

@peterhimler @crowdsourcing, isn’t there a way to crowd-source a fix for “BP’s mess?” @erichippeau

@Crowdsourcing Yep. Make an X-Prize of it. RT @PeterHimler Isn’t there a way to crowd-source a fix for BP’s mess?

“Is Establishing An “X-Prize” The Key To Fixing The BP Oil Leak?”

Today, we learn from Case Foundation’s chairman Steve Case who attended the TEDxOilSpill conference along with ” some of our nation’s greatest thinkers…to help solve some of the most pressing issues related to the oil spill in the Gulf of Mexico:”

@stevecase At #TEDxOilSpill, @XPrize announces $10 million challenge to clean up the #oilspill (via RT @brainpicker)

Is there evidence that these early tweets led to today’s news from Washington DC? No. Still, maybe The Business Insider follows Jeff Howe, and the Case Foundation and TED Conference follow either or both. However it happened, it’s just cool to see how good ideas on Twitter could have the capacity to catch fire and morph into something real and positive.