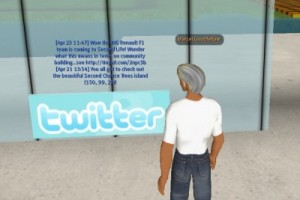 Over the years, this blog has looked at the phenomenon of hype, and specifically, how too much of it can result in diminishing returns for the recipient (i.e., your client). I always believed that regulating media attention, especially when demand for client access is at its peak, leads to long-term sustainability and (en)viability.

Over the weekend. Steve Rubel tweeted a link to an item posted on PaidContent, the must-read chronicler of all things digital content. It compared Twitter’s media trajectory with that that of Second Life.

In “The Second Life Hype Has Fizzledâ€”Is Twitter Next?,” reporter Tameka Kee recounts MediaShift’s Marc Glaser’s sobering and substantive assessment of the once mighty virtual world from the perspective of media coverage thereof and participation therein.

“How did the media go wrong in coverage — and participation — in SSL, and what went right? It was a typical hype-and-backlash scenario…”

Glaser describe the rush by many news organizations to open SL bureaus and the great public fanfare that ensued. Even a few PR agencies flocked to Second Life to establish beachheads. (This blogger once strolled into a Second Life PR meet-up without his shirt.)

Glaser quotes Rob Hof, Business Week’s Silicon Valley bureau chief, who anointed Second Life on the cover of the magazine in the midst of the media feeding frenzy:

“Unless you consider coverage of any kind as constituting breathlessness, I’m not sure the overall coverage was too breathless [back in 2006]. It was just voluminous for awhile there, probably a little too positive at the outset and then, for some good reasons, more negative later…As you know, this kind of cycle is endemic to journalism, for better or worse: Build ’em up, tear ’em down.”

Glaser did acknowledge that there’s some life remaining in Second Life:

“While the effusive media coverage might be long-gone, Second Life is evolving into a practical platform for some educational and business purposes.”

“So what does this have to do with Twitter? Twitterâ€™s hype has reached a fever pitch. Celebrities including Britney Spears and Shaquille Oâ€™Neal Tweet regularly, and with stories on CNN, in the WSJ and the NYT, among others, itâ€™s garnering about half as much news coverage as Facebook, with barely a tenth of Facebookâ€™s traffic (via VentureBeat). Flush with $35 million in new funding (and still no business model yet), Twitter could be headed for an incredible backlash.

I, for one, do not believe that Twitter will suffer the same hyperbole-fueled media meltdown as Second Life. First, Twitter’s much easier to use. Second, the development crowd already has written hundreds of apps for it, and third, did you follow #oscars feed last night during the telecast? How fun was that?

Still, if I were @Ev, @Biz or @Jack, I’d tread very carefully with regard to media coverage at this pivotal point in the microblog’s history. Stay focused on the user experience and business model.