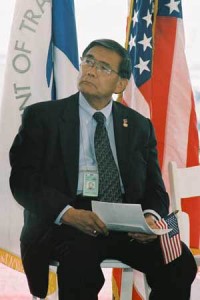 When we last left you before this sparkling New York weekend, we were talking about the PR machinations of the Beltway. Today, we learn where the Bush Administration’s latest high-level defector is headed — to Hill and Knowlton.

Former U.S. Transportation Secretary Norman Mineta, the only hold-out from the Clinton era to serve in the Bush Cabinet, has been named vice chairman of the WPP firm reporting to H&K CEO Paul Taafe.

“I was fortunate in my public-service career to participate in addressing some of the most complex domestic and global issues affecting trade and transportation, and to learn from some of the very best in developing programs and driving policies,” says Mineta in a statement. “In our successes, I found that effective, straightforward communications played a key part.”

I found it curious that when news of Mr. Mineta’s departure first broke almost two weeks ago, there was no mention of his future employer. Was this a deliberate delay designed to minimize the recent criticism of the many Administration officials who cashed in on their Rolodexes after leaving the Bush White House? I wonder.