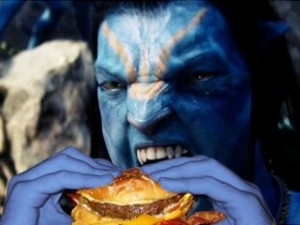 It started with Fox’s “terrible and shameless promotion” during the 4th game of the World Series.

America had its first trailer-length glimpse of James Cameron’s $300 million epic “Avatar,” which seemed to produce the opposite effect for many. The Times’s Carbetbagger David Carr tweeted:

@carr2n: These wall-to-wall Avatar promos are not having the desired effect on me. Looks, um, dumb. 8:26 PM Nov 1st from TweetDeck

A couple of weeks later, Cameron’s PR team orchestrated a titanic exclusive with the conversation-catalyzing “60 Minutes.” This put the film squarely on the map, but the $300 million price tag, and that early Twitterized reaction to the trailer, left a tainted taste. Then the film’s marketing partners kicked in, most notably Panasonic, which ran its own network spots showcasing its flat screens. The McDonalds‘ spots are rarin to go.

Critics heading in to last week’s first screenings all had the conventional wisdom: a boffo price tag and less-than-stellar buzz. If there ever was a film that was queued up for a panning, this was it. (Schadenfreude’s big in Hollywood.) But guess what? The two key industry trades broke the review embargo with these words:

Hollywood Reporter “Bottom Line: A titanic entertainment — movie magic is back! A dozen years later, James Cameron has proven his point: He is king of the world.”

Variety “The most expensive and technically ambitious film ever made, James Cameron’s long-gestating epic…delivers unique spectacle, breathtaking sights, narrative excitement and an overarching anti-imperialist, back-to-nature theme that will play very well around the world, and yet is rather ironic coming from such a technology-driven picture.”

Who’d a thunk? Could that early negative buzz have actually helped propel this film beyond anyone’s imagination?

Sure enough, there was James Cameron sitting this morning with Meredith Vieira on NBC “Today” and the New York Post running two features — its own and a two-page spread from The Sun newspaper, both owned by News Corp., the parent of 20th Century Fox, which is releasing Avatar. Talk about synergy!

David Carr, who may have surreptitiously set the movie’s early negative tone, today created another related bit of a firestorm by drawing his readers…and their readers..and their readers’ collective attentions to the Wall Street Journal political bias in its news hole. That column prompted an unusual retort from WSJ editor Robert Thomson.

Even so Mr. Murdoch, I wouldn’t worry about that so much. At least The Carpetbagger seems to be coming around on Avatar. And that’s the real elephant in the room right now.