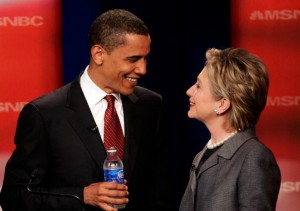 If authenticity is the new PR buzzword, then who’s going to explain it to Sen. Obama’s PR consiglieres?

Didn’t anyone learn anything from the faux photo-ops and canned colloquialisms deployed by the Bushies to intentionally deceive the public these last seven years?

Americans so desperately want a commander-in-chief with a reasonable command of the English language, but without the command and control means of manufacturing an image, no matter how divorced from reality that image may be.

I have this sudden fear that the Democrats, in their inimitable and historical way, are going to blow it big time come November. It’s nothing in particular, just a few tell-tale signs that the PR handlers still are obsessed with style over substance.

To address the lingering perception that a schism still exists within the Democratic Party, the Senators from New York and Illinois will jet to New Hampshire on Friday for a joint appearance in, where else, Unity, New Hampshire (population 1,715) .

Aargh! Couldn’t one of the David Axelrod’s brainstrusts come up with something better than Unity, NH? (It reminds me of Bayer’s wellness living laboratory years ago in Wellsburg, West Virginia.) Worse, it reminds me of Mission Accomplished and Bush in a flight suit. It simply smacks of artificiality, and this PR vet will not be the only one who notices.

You simply can’t fake unity, no matter how expedient the name of that town may be. In fact, I suspect that by holding the rally in Unity, Senator Obama’s PR handlers may actually produce the opposite effect of the one they intended. As Politico’s Ben Smith observes: “No symbolism is too direct for a Presidential campaign.”

Then again, perhaps this is the kind of kitsch Americans love?