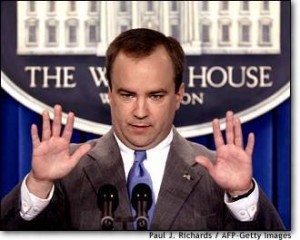 The Magazine Publishers of America used to hold day-long symposiums for those charged with promoting, publicizing and primping its members’ content, ad page growth, circulation strides, etc. Due to budget constraints, the trade group ceased holding these annual gabfests.

I remember one particular session that featured Vanity Fair contributing writer Michael Wolff, a steely-eyed media “pundit” who then toiled as a columnist for New York magazine (where he honed his menacing media machismo).

There he was on the dais with other ink-stained pioneers of the media dissection game including Steve Brill (Brill’s Content), New York Times ace-du-jour Alex Kuczynski, and the pre-Timesman Lorne Manley. The room was packed with youthful, exuberant magazine PR types who sat there stoically as Mr. Wolff proceeded to condescend to them about their inane and misguided pitches, paucity of intelligence, blah blah blah, the usual.

I therefore found his current VF feature eviscerating White House press secretary Scott McClellan — no stranger to this blog — a must read for those in the biz. My first question concerns the White House’s wisdom (or lack thereof) in even agreeing to subject Mr. McClellan to the PR-antagonistic Mr. Wolff. Couple that with the knowledge (or lack thereof) of this particular magazine’s monthly crusade against the Bush administration.

Then we learn that this story did not result as a response to an interview request by Mr. Wolff, but rather one that the White House’s (confused) communications team actually pitched to the pugnacious writer! Talk about a recipe for disaster.

Mr. Wolff mwas no doubt pleased to be greeted by a Federal stenographer with tape recorder (an increasingly common PR tactic ploy to protect Mr. McClellan from being quoted out of context). A lot of good that did. In his piece, Mr. Wolff astutely recognized at least one core PR competency lacking in Mr. McClellan:

“His lack of verbal acumen, his lack of dexterity with a subordinate clause, becomes another part of the way to control the White House message in a White House obsessed with such control. He wouldn’t be able to cozy up to the press. That requires a serving-two-masters deftness. A special tonal range. A wink. A nod. An emphasis. A surgical use of modifiers, so that I say what I have to say in such a way that we all understand what I mean to say. A little Kabukiness. This is not just sophistry, something else that straight shooters don’t practice; it’s verbal athleticism. Language is the game. You need to have a gift for it.”

Mr. Wolff is a keen media observer and forceful writer whose prose in the current issue of Vanity Fair hits some notes worth thinking about…in spite of his general disdain for the profession.