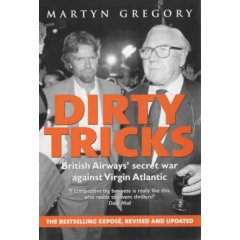 We all know that the films shown on airplanes differ from those bowing in theatres. After all, the airlines need to appeal to all ages and cultural sensibilities. Though I do recall catching some fairly graphic scenes in a seatback-shown film on a Qantas flight from Sydney to Los Angeles. And no, this wasn’t the one featuring the Qantas stewardess and actor Ralph Fiennes joining the mile-high club.

News out of London today has one big-branded airline company leaving its arch rival on the cutting room floor. British Airways apparently removed all visuals of Sir Richard Branson, founder of Virgin Atlantic, from its in-flight version of the Bond film “Casino Royale” in which Sir Richard appears in a negotiated a cameo role.

A spokesman for BA said only that it “previews films before they are screened on our aircraft and regularly edits films” on the grounds of taste and suitability.

BA could argue that Sir Richard’s taste and suitability leave room for interpretation. The motivation for altering the film likely had little to do with taste and more to do with thwarting a rival airline’s future suitability for BA’s passengers. I suspect the creative types at Virgin Atlantic might have some fun with this — as they should.

“We think that passengers should see all the film, and nothing but the whole film,” said a Virgin Atlantic spokesperson.

Obviously. But, VA, you could do better than that.