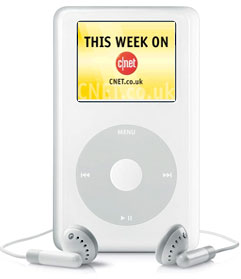 Yesterday I accompanied my friend and colleague Andy Plesser of Plesser Holland Associates over to The New York Times digital headquarters to grab a digital video interview with NYTimes.com editor Len Apcar.

No. Andy and I didn’t forego the PR profession to moonlight for CNN or CSPAN. Rather, Andy plans to post the interview on his new video weblog Beet.TV. Mr. Apcar, who did a great job talking about the evolution of nytimes.com, will be in good company alongside digital and media luminaries like Esther Dyson, CNET’s David Carnoy, and others.

This week, PR Week’s Hamilton Nolan reports on how PR professionals are using video weblogs to advance their clients’ communications objectives. While they may never replace the mainstream thrill of a “Today Show” appearance or CNN news package, the video weblog is poised to become an increasingly effective PR tool as consumer broadband access flirts with ubiquity.

Why am I so bullish? If a fledgling outlet like beet.tv can land Ms. Dyson and Mr. Apcar; if Eric Schwartzman’s Spinfluencer audio podcast can secure Ken Auletta and Harold Burson; and Hobson & Holtz can commandeer the leaders of the new digital media economy, who’s to say that CNN or CSPAN has the exclusive beat on reasonably compelling content?

More tantalizing are the prospects for creating one’s own digital audio and video feeds to advance a client’s goals. (And I’m not talking about those digital video streams that play out on a corporate website.)

Consider this: you fail to land your client on one of the three network morning programs. Instead, you opt to interview the client yourself (or produce a video package) for posting on a weblog you’ve built (with the client’s fee). The video is tagged with keywords so that anyone “intent” on finding more about the topic can easily stumble upon the video through search. The video is eminently discoverable, linkable, viral, and, controllable so that a client’s message successfully penetrates the exploding number of digital consumer devices with broadband access.

One warning. Remain diligent about identifying sponsored video content (versus pure editorial). On Plesser’s beet.tv, CNET executive editor David Carnoy waxes poetic on how “the new generation of inexpensive video cameras will fuel ‘clip culture.'” It’s an informative interview — well worth watching — but more importantly, it discloses that CNET (and its subsidiary Ms. Dyson’s company) are clients of Plesser Holland. Good thing since the PR Watch police are always lurking in the shadows ready to pounce.