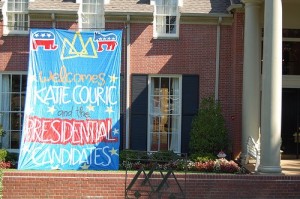 How much influence does post-debate coverage have in determining the evening’s ultimate winner and loser?

A considerable amount, if you believe the WashPost’s media watcher Howard Kurtz who today turned his sights on the “spin doctors” who were working their “voodoo” at Ole Miss following Friday’s stand-off:

“Obama may have won the insta-polls after Friday’s debate here at the University of Mississippi, but the McCain team won the spin war, a post-game ritual that quickly seeps into the punditry enveloping such events.”

Kurtz observed how each campaign’s consiglieres and surrogates cherry-picked their candidate’s freshly-minted sound bites to proselytize before a suppliant gaggle of journalists.

“Moments after the debate, the front of the tent resembled a crowded bazaar, festooned with huge yellow signs for McCain surrogates and narrow blue ones for Obama advocates…While Axelrod fielded questions in one corner, McCain spokeswoman Nicolle Wallace was surrounded by a second press pack six feet away.”

Spinning the light fantastic is nothing new, and frankly, not relegated solely to the debates. For every breaking news event, we’ll find political partisans, message points in hand, satisfying TV bookers’ thirst for “insider” commentary. The revitalized Katie Couric, no stranger to this blog, even opened her interview with Obama campaign manager David Axelrod by saying: “Go ahead, David, spin me.” (I hate that verb.)

The bigger question I have is which party does a better job in mobilizing when the news gets hot. Judging by Obama spokesperson Linda Douglass’s response to an instant TV ad that featured Obama’s debate comments acknowledging issues of common ground with McCain:

“I can’t believe that anyone is criticizing someone, in this hyperpartisan environment, for being gracious enough to acknowledge where there are areas of agreement,” the former ABC correspondent said. “I find it surprising that journalists would be raising questions about a candidate who is capable of acknowledging that his opponent has a point.”

Linda, welcome to the real world. Is it a surprise that the Republicans will say or do anything to change the conversation to advance their political agenda? The Dems better learn to be more nimble (and less gracious) if they expect to prevail in November.