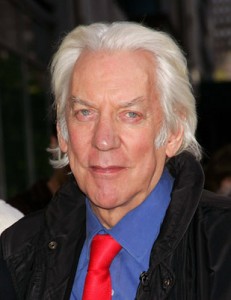 Kiefer Sutherland. Here’s a guy who seems to have it all: looks, smarts and a taut, timely, well-written hit series on Fox. Even with all this, he’s headed to jail for 48 days after pleading no contest to a DWI charge. I don’t get it.

You didn’t hear about it? Well, for reasons that escape me, Kiefer’s tee-totalling travails didn’t rise to the same shrill level as those of his fellow celebrity incarcerees, one of whom reportedly hopes to leverage their shared misfortune to regain some notoriety. Maybe Hollywood scribes are more fixated on famous females in the clink. Could it be a double standard?

Getting back to the title of this post, I absolutely despise the elder Mr. Sutherland’s (pictured) new ABC series “Dirty Sexy Money.” Not only does the title irritate, but the cast of characters in this stupid, unrealistic, exploitive, crass, piece of Hollywood muck should be embarrassed every time they open their mouths.

I guess what irks me most is the gall the producers had in locating this faux family farce in New York. Yes, I know. “Seinfeld” was filmed on the west coast, but it managed to retain a distinct New York sensibility (in spite of some street scenes looking remarkably unfamiliar). And “Sex and the City” did a fab job showcasing the city — at least a certain aspect of it.

The scenes and characters in “Dirty Rotten Money” bear no resemblance to the New York I know or any New Yorker I’ve ever met. (And I grew up here.) This includes the post-mortem unpleasantness of Mrs. Duke and Mrs. Astor.

Consider the character played by one of the Baldwin brothers (don’t ask me which one). He’s an alcoholic businessman who aspires to be a U.S. Senator from New York and, by the way, is having an affair with a transvestite. At his campaign kick off party, incongruously held at Bulgari, one of the world’s most expensive jewelry stores, his “sister” gets into a clothes-ripping cat fight on the Fifth Avenue sidewalk before scores of wild paparazzi and camera crews as if it were some Hollywood Awards ceremony. (Since when does a political campaign event even lure paparazzi?) Another of Mr. Baldwin’s TV siblings is an impossibly handsome priest (in collar) who fathered a young boy of whom he’s publicly disavowed parentage.

Nothing in this silly show is remotely plausible, nor above exploitation. At least JR and Ellie seemed like true Texans in the classic prime time sitcom series “Dallas.” Even the brothers & sisters in ABC’s other big family series are working from an intelligent and believable script.

As I watched “Dirty Sexy Money” (for the last time), all I can think of is how dare Disney miscast our city as some kind of Hollywood Babylon. I say cancel the show or minimally, banish this group of mindless misogynistic misanthropes from the island — the island of Manhattan.