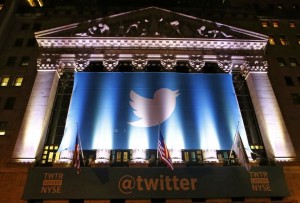 The most seasoned and successful practitioners in the public relations business have a finely honed instinct for how something will play out in the court of public opinion. Recently, however, two very big corporate gaffes made me wonder whether their communications consiglieres turned a tin, if not deaf ear to activities that would prove deleterious to their organizations.

The first entailed Jimmy Lee’s ill-fated, and ultimately cancelled Twitter chat in which the legendary JP Morgan investment banker and vice chairman would subject himself to any question from anyone with a Twitter handle, fresh off his bank’s co-underwriting of Twitter’s flawless IPO. (Was this some sort of a give-back to $TWTR?)

Buoyed by that successful public offering, some social media manager, in his or her infinite (lack of) wisdom, thought Mr. Lee would give a command, and JPM reputation-building performance with an AMA-style session on its happy client’s social platform. Inexplicably forgotten were a few small historical facts including the billions in record-setting penalties the bank just paid for its fiduciary transgressions, and the fact that Mr. Lee was not even a Twitter user.

Still, the bank set the hashtag (#AskJPM), and the fun began. Here are a few of the notorious tweets: 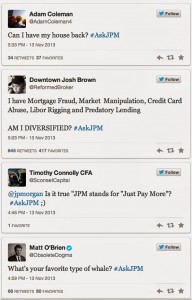 And the one tweet that mattered when someone regained their senses:

This gaffe, btw, was not unlike a Chevy promotion in the early days of CGM when the automaker invited the public to create commercials for its 2007 Tahoe SUV. Here’s one that contributed to the promotion’s cancellation:

I do give JP Morgan and Chevy some points for willingness to explore new digital channels, and I feel for Jimmy Lee for being asked to to do this.  Nonetheless, they both earn more PR demerits for not having the foresight to anticipate the harsh public fallout.

The second Tin Ear goes to Walmart, which today finds itself embroiled in a controversy that re-surfaces a contentious issue that somehow had fallen off the media’s radar. I’m talking about the below-living wages that many of Walmart’s 2 million+ employees earn. Yes, we’ve all seen the company’s buoyant TV campaign, which extolls the many “benefits” Walmart workers enjoy. If you haven’t seen, here’s one iteration:

In the same vein, a Walmart in Canton, Ohio believed it would be a collegial and festive idea to hold a food drive to help the store’s low wage-earning colleagues get by during the upcoming holiday season. Huh? This “good will” effort prompted one Walmart shopper to tell the Cleveland Plain Dealer: 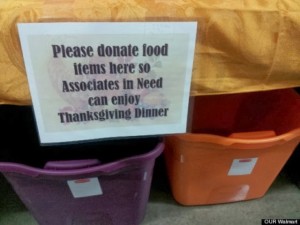 Other media naturally chimed in, including this zinger from Salon in which we learn that Walmart’s heirs have more wealth than the poorest 40% of the entire U.S. population.  The food drive seems quite incongruous, if not morally abhorrent when you view it in those terms.

I suppose it was Costco’s Jim Sinegal who proved big box retailers could do good (by their workers) and do well at the same time. Still, I don’t expect this unwanted attention to move the Waltons to demand a change to Walmart’s pay structure. After all, the worker benefit ad campaign is pretty effective in glossing over the reality.