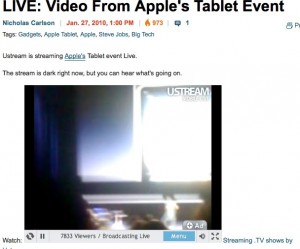 Yet, here we are at the moment of truth. The time has arrived. It’s zero-hour and every media, tech, marketing and business reporter, plus the myriad Apple enthusiasts, and every other gadget guru on this planet (aren’t we all) are either witnessing the Steve Jobs-hosted event live in-person, or are sitting in front of their screens desperately trying to soak in the news.

Except one thing: there isn’t a single clean video and audio feed of this monumental media event. WTF! I’m confused. Doesn’t Apple’s vaunted PR team recognize the immeasurable value of feeding video of the launch of its new iPad directly to the rest of us? We’d even accept a single fixed camera!

The seemingly semi-official video stream, from Ustream (pictured above), is being captured on a cell phone, for goodness sake. HuffPost’s touted a live video stream, but instead has Leo LaPorte and someone else chatting it up on a talk show set with blurry (but perhaps the best video of the bunch). Engadget has still images and texts. TechCrunch is inaccessible on my iMac. CNN’s feed had fits and starts. And the Twitterstream is just that: short text bursts only.

I’m baffled. Didn’t Apple learn from rival Google’s recent launch of its category-killing Nexus One Andorid phone? If it weren’t for Scoble’s altruistic video stream for that one, we’d have been lost. Alas, Mr. Scoble is at home at Half Moon Bay with another commitment.

BTW – Glad to have tweeted this a few days ago: