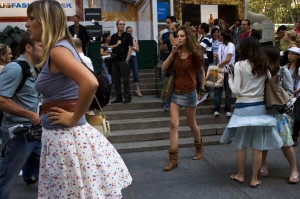 Well, the big news at this year’s event has 20-something fashion bloggers gaining a foothold in the media pecking order.

Their journalistic ascendance is akin to the FishBowl DC reporter gaining a press credential for the White House daily presser. The fashionistas seem to have gotten hip to what Silicon Valley and the Beltway have known for sometime: media buzz can percolate from the bottom up and spread virally from there.

Today’s Wall Street Journal takes a look at the 40 some odd bloggers who managed to get some respect this year. Wasn’t 40 the number of bloggers that the Scobleizer recommended to start building buzz? The Journal reports:

“Many public-relations firms that draw up guest lists for designers are doing their own research. Alison Brod, a New York publicist who represents designer Jill Stuart, now has an employee focusing exclusively on blogs, tracking their impact on sales, among other things.”

It reminded me of the early days of photo syndication. Who could forget Dave McGough who parlayed his NY Post regular photo gig into a international celebrity photo syndicate?

Back then, we turned away any photographer who did not have a legitimate assignment from a recognized mainstream photo desk. Then along came (citizen photographers) from big and small photo syndicates like Gamma, Sygma, Sipa, Retna, LGI, etc., and we had to open the door wider given the pick-up their images soon enjoyed. (Today that world is dominated by Corbis, Getty Images, and Wire Image.)

So how does one determine which bloggers to let in and which ones to leave out?

“…one company plans to launch a new fashion blog-ranking system called GlamCentral that will use criteria such as “most viewed,” “most linked to” and “most commented on.”

Smart, though it sure sounds familiar. If you have the pick-up (e.g., link relevancy), you’re in. If not, keep workin’ it. You’ll get past the proverbial velvet rope.