Just as my Twitterstream is about to be overrun by hangover-induced tweets from the Consumer Electronics Show in Vegas, former tech scribe for The Journal Nick Wingfield who’s now toiling for The New York Times, yesterday presented a sobering view of the last standing major consumer electronics confab on the planet.

In his Times piece, “A Tech Show Loses Clout as Industry Shifts,” Nick questioned the value of CES as a platform for launching major products:

“…the show is unlikely to be where any blockbuster products of 2012 are introduced. Many of the hottest new gadgets in recent years â€” including Appleâ€™s iPad and iPhone, Microsoftâ€™s Kinect and Amazonâ€™s Kindle Fire â€” were first announced at other events, even though C.E.S. remains the worldâ€™s biggest consumer technology convention.“

He talked about the changing nature of personal consumer electronics:

“…the most important developments in the electronics business are no longer coming from the makers of television sets and stereos that have been most closely identified with the show since it started in 1967.”

True and true, but I believe that CES still serves as a valuable venue for product introductions, not unlike how the Super Bowl is a showcase or ad creative or a catalyst for countless game-related sidebar stories. First and foremost, the show continues to draw a captive (and maybe even its largest-ever) contingency of credentialed journalists, each of whom is tasked with filling his or her editorial pipelines with gadget-driven stories. Clutter, yes, but a very large firehose to fill. 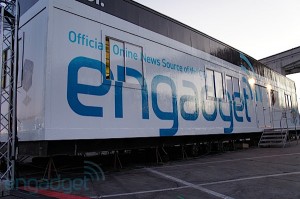 Muckrack, btw, offers a decent way to identify CES reporters without pissing any off through misguided overtures. Moreover, a cursory look at the first day’s tweets will give you a sense of just how much editorial content (i.e., earned media) will emerge from the show, and frankly, why CES remains an important factor in one’s marketing plans:

Tim Bradshaw, The Financial Times: My brave @FT colleagues @chrisnuttall @richardwaters & @mattgarrahan are at #CES – follow their exploits at http://www.ft.com/ces2012

Joshua Topolsky, The Verge: Our girl @joannastern is killing it at Intel keynote #CES2012 The Verge

Andrew Wallenstein, Variety: Rovi announces tech at #CES that lets you convert your DVDs into digital copies for Ultraviolet. #nice

PSFK: At #CES this week? Just a reminder to look out for PSFK’s @piers_fawkes and @JGWeiner who are flying in today.

And then of course there’s this. (Be careful what you wish for, Roy.)

Roy Furchgott, The New York Times: Packed and ready for C.E.S. Then I realized I have no meetings set for Monday morning or afternoon. Oops. Not liking the down-time.

Sure, the big guys – Apple, Amazon, Google — already have their captive media audience for any of their big or small product or corporate announcements.  But what about the rest of us?  Getting one’s start-up on the docket for TechCrunch Disrupt or an O’Reilly Ignite event can provide some decent media fuel to set tongues a wagging. But that’s a big if.

It’s no coincidence that Mashable chose CES as the venue for its Mashable Awards show and networking party. Other than SxSW, CES remains a vital venue for virtual connections to get physical, and there are scant few in the tech space who’ll argue the value of that. As Scoble recently wrote on his Google+ stream:

“One reason I love traveling is because it is a people-meeting affordance…It always amazes me at how often I’m sitting next to someone interesting in trains and planes and how rarely people even introduce themselves. It’s one of the things that makes travel interesting. The randomness of it all. It also makes me realize that great tech stories can just be sitting right in front of you. You just have to figure out what they are. Do you have a story of when you were traveling and met someone interesting?”

While I wish I was out there in Vegas right now – who doesn’t? —  I am looking forward to my several days in Austin for SXSW Interactive. I’ll be at the Courtyard Marriott next to the Convention Center, if you care to say hello.