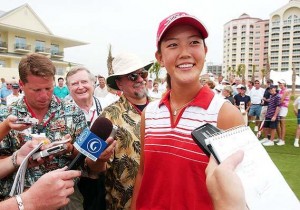 With the ascendancy of 15-year-old female golfing sensation Michelle Wie to the pro ranks, Reuters today moved a story on what Michelle might expect from the “fifth estate.” It suggested she take a media management page out of the Tiger Woods playbook. Mr. Woods, it seems, has “perfected” his “statesman-like approach” to the media and has shied away from one-on-one interviews.

Of course, this dignified behavior is in stark contrast to the public miscues of many other pro athletes including The Eagles’ Terrell Owens, The Pacers’ Ron Artest and, of course, the PGA’s John Daly.

It is SOP these days for pro athletes to submit to “media training” during their rookie year and periodically over their careers. I once traveled to ATP headquarters in Florida to run a number of pro tennis players through the paces, including Pete Sampras and Sergi Brugera. It wasn’t a matter of bad behavior, but more to make them comfortable in an interview setting and better at communicating what they wished to communicate.

I wouldn’t be surprised if Nike or SONY footed the bill to further Michelle’s media education.