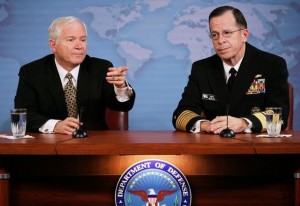 The Associated Press moved a piece yesterday on The Pentagon’s growing PR spend:

The AP’s comprehensive investigation revealed that:

“…over the past five years, the money the military spends on winning hearts and minds at home and abroad has grown by 63 percent, to at least $4.7 billion this year, according to Department of Defense budgets and other documents.”

Now it’s to be expected that The Associated Press, of all journalistic enterprises, would equate PR and propaganda, especially after eight years of the Bushies giving our industry a black eye with the likes of Armstrong Williams, paid “news” stories, and former generals-as-TV surrogates.

But what intrigued me most about the AP look into Pentagon PR was whether the military’s communications operatives (all “27,000” of them) will diverge from the command-and-control ways of the previous administration. In other words, will Obama’s much-heralded social media and direct-to-constituent communications paradigm seep from the Oval office into other areas of the government?

Some say it already has. Wasn’t that Missouri Senator Claire McCaskill (@claircmc) twittering her doings in DC last week? And she’s not alone. Still, judging from some of the findings in the AP report, I’m not especially encouraged in spite of sporadic glimmers:

“The biggest chunk of funds â€” about $1.6 billion â€” goes into recruitment and advertising. Another $547 million goes into public affairs, which reaches American audiences. And about $489 million more goes into what is known as psychological operations, which targets foreign audiences.”

There’s something about that word “target” that gives me pause.

“Rear Adm. Gregory Smith, director of strategic communications for the U.S. Central Command, says psychological operations must be secret to be effective. “We have to be pragmatic and realistic about the game that we play in terms of information, and that game is very complex,’ he says.”

So much for transparency. At least the Obama administration plans to scrutinize The Pentagon’s profligate PR spending:

“With a new administration in power, it is not clear what changes may be made. Obama administration officials have said they intend to go through the Department of Defense budget closely to trim bloated spending.”

Still, I wish they’d consider inculcating the military’s PR’ists with the social media strategies that they and many forward-thinking companies have successfully deployed. As of right now, I can’t help but be pessimistic:

“In February, the Army released a new eight-chapter field manual that puts information warfare on par with traditional warfare. The title of an entire chapter, Chapter 7: ‘Information Superiority.'”