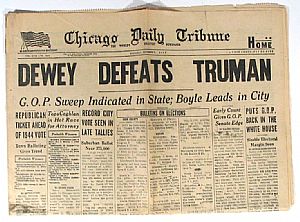 The first news reports rarely get it exactly right. The news of an alleged gang rape of a stripper by the Duke lacrosse team produced national condemnations, on-campus candlelight vigils and all kinds of public posturing from the usual interloping civil rights leaders we’ve come to expect since the days of Tawana Brawley.

Now, some months later, the legal case that local DA Mike Nifong constructed so assiduously in the court of public opinion (to get himself re-elected) is in tatters. The latest revelations just seem so removed from those first reports. In fact, Mr. Nifong is now being encouraged to recuse himself from prosecuting the case.

A few months ago, the FCC levied an unprecedented $3.6 million fine on the CBS affiliates for an episode of one of the network’s top-rated programs “Without a Trace.” Apparently, the episode depicted young people in some kind of orgy-like setting, which supposedly set off howls of consumer protests and letters to the regulatory agency.

Today the CBS affiliates are rebutting the multi-million dollar fine because the vast majority of the 4211 complaints “weren’t from real people.” They were part of an orchestrated campaign by two (right wing) activist groups with Ivory soap-sounding names: The Parents Television Council and the American Family Association.

I am curious to see how this one plays out, especially considering where these two activist groups fall in the political pecking order of this Administration.