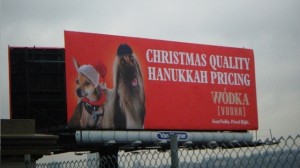 What’s the best way nowadays to thrust your unknown brand into the public spotlight?

For one brand in the ultra-competitive vodka category the answer seems to have emerged during a marketing creative session in which the participants apparently helped themselves to a more-than-generous sampling of the product.

The result surfaced above New York’s West Side highway on a billboard that read:

Two carefully selected dogs were pictured. One in a Santa hat, the other in a yarmulke. Now clearly this ad offends through its stereotypical depiction of the Jewish people.  I just wonder whether the geniuses behind this campaign recognized how offensive the creative execution  really is/was, and went ahead anyway.  The importer Panache describes the brand this way on its website:

“In 2009 Panache brought Wodka Vodka to market â€” a quirky, premium vodka with a value vodka price tag. WÃ³dka was a hit drawing the attention of consumer and business media alike for its fresh positioning and innovative business strategy. Wodka Vodka sold its first bottle in October 2009 in New York City, launched its marketing campaign nine months later and recently, following multiple features in Time Magazine, Forbes and Bloomberg Businessweek, has been anointed as the leader in the rapidly growing ‘Cheap Premium’ segment of the vodka category. Panache is focused on growing Wodka Vodka rapidly while maintaining the humble, egalitarian beginnings of the brand.”

Truth be told, Twitter was all a-flutter about the campaign, which also earned the Gawker treatment. Had you ever heard of the brand prior to this?

On second thought, the purveyors of (tasteless) Polish vodka came to their senses in recognizing it’s not nice to f**k with the residents of Manhattan’s upper west side, let alone the Anti-Defamation League, which issued its own opinion. The billboard will be coming down.  From The Examiner:

“UPDATE(November 22 3:45 EST): According to a publicist who works with Wodka vodka, an official response is being prepared, but the publicist assured Examiner that the billboard in question ((Christmas/Hannukah”) ‘is coming down.’

Let’s drink to that. Now if only the Boycott Kim (Karadshian) petition would have the same effect!