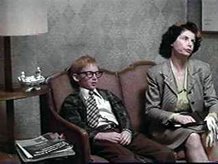 Who can blame Woody Allen for being depressed? After all, the enigmatic and prolific filmmaker must withstand the monotony of back-to-back-to-back interviews for yet another of his yearly rights-of-passage. (It could be worse. He’s camped out in a suite at The Mark Hotel in NYC.)

There was a time when Mr. Allen didn’t avail himself to a single ink-stained wretch, let alone a media junket. That unavailability, coupled with some pretty darn good creative output, elevated Mr. Allen to an altogether higher level of fame on the celebrity-o-meter. Of course, the Mia and Soon-Yi saga, not to mention Jean Doumanian, took him down more than a few notches.

So why is he playing the media junket game now? And why would he use the opportunity to share with prospective filmgoers his utter state of depression? (After all, aren’t we all depressed by the state of the nation.)

If you’re Mr. Allen’s PR consigliere, would you have the temerity to “message” him so that his new film stands a chance of realizing a profit? If CEOs and world leaders sit through communications training sessions to “command and control” the tenor if not substance of the end editorial product, what’s with the Hollywood (yes, Hollywood) elite? Mr. Allen, get thee to an orgasmatron! (Oh, by the way, Mr. Allen’s new film is titled “Scoop.”)