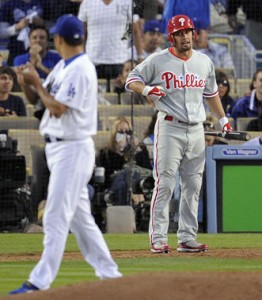 It made perfect sense. Why not glom onto the current national obsession for the national pastime to spark media interest in your company’s predictive technologies?

I’m speaking of course about the baseball playoffs, and more specifically about the two teams that will end up in the season-ending best-of-seven.

One enterprising company claims to have analyzed some 40 years of baseball stats to conclude that this year’s World Series will be an all-southern California affair. In fact, the quants at Information Builders went so far as to predict the winner. Here’s a take from the pitch letter:

“To come up with their prediction, the company analyzed 40 years of baseball statistics from all of the teams that made the playoffs such as winning percentage, runs scored, batting average, total extra base hits, earned run average and fielding percentage. As a result, Information Builders was able to predict The Los Angeles Dodgers will defeat the Los Angeles Angels of Anaheim in the 2009 Fall Classic.”

As we all know, the quality of the pitch matters little if the batter is inherently predisposed. I mean if I were to receive this, I would probably give it short shrift given my predilection for the prospects of the New York Yankees. In this case, the pitch recipient was Larry Dignan, editor of ZDNet and an avid Philly fan. His take:

“But before pitching someone the PR teams should at least check a locale or two. Iâ€™m a tweener between New York and Philly. Do you honestly think Iâ€™m going to be hip to a Dodgers World Series win? And can I really take a predictive modeling exercise seriously that left out my Phillies?”

I suppose the LA Times sports or technology desks might have been a better place to start, but then again Dignan did finagle a hit out of the pitch.