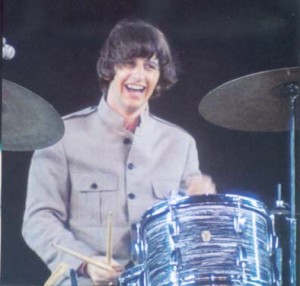 I haven’t heard of a pop song running less that 2:30 minutes, well, since The Beach Boys’ “Wouldn’t It Be Nice” (RT 2:25) hit the terrestrial airwaves in ’67 or thereabouts.

Ringo, who’s in town promoting his new album, agreed to slice 45 seconds off his 4-minute 15-second gig, but it didn’t cut muster with Michael “Machiavelli” Gelman who, to his credit, did bend a bit to allow a running time of “under 3 minutes.”

Even so, Ringo bolted the studio with these parting words: â€˜God bless and goodbye. We still love Regis.â€â€™

Ringo’s publicist fell on her sword:

“…due to miscommunication between his publicist, Elizabeth Freund, and the musical director, Starr didnâ€™t realize the performance had to be 2 1/2 minutes or less, Freund told The Associated Press.”

Rege’s publicist was all too willing to pass the buck:

“A spokeswoman for â€œRegis and Kellyâ€ told the AP the showâ€™s producers tried to work with Starr, noting his appearance had been booked since November and the time requirement for the song â€” the showâ€™s standard â€” had been expressed numerous times.

Just think. Only 30 seconds separated America from hearing the latest track from Ringo’s new album. What a shame!