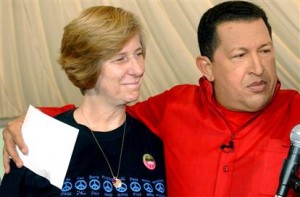 A previous posting on this blog took a critical look at the PR missteps of someone I initially admired for her brave and steadfast stand against the policies that she blames for her son’s death in Iraq. I’m sorry to report that Ms. Cindy Sheehan’s handlers have led the activist housewife astray with a new publicity pop apparently aimed at rekindling that fleeting fame, but void of the sympathy that made her foray onto the national scene so effective.

She now has aligned herself with Hugo Chavez, the Socialist president of Venezuela, to criticize this President and his policies. It’s strangely reminiscent of Jane Fonda’s trip to Hanoi and how the North Vietnamese government used the actress as a propaganda pawn — something Ms. Fonda ultimately came to regret.

Like Harry Belafonte before her, Ms. Sheehan should have given a little more thought as to whom she could leverage to reassert to her once simple, earnest and effective message. There just seems to be a disconnect between the deployment of Mr. Chavez and Ms. Sheehan’s goals to win over the hearts and minds of most Americans. Where are John Murtha or George Clooney when you really need them, Cindy?