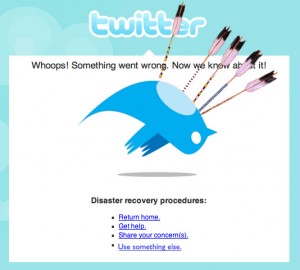 What’s a socially networked person to do? All these outlets to share one’s thoughts, ideas and cool links! It’s exasperating. Well, first he or she should get a handle on each channel’s distinctive DNA and utility.

Take Twitter. The inimitable David Pogue, who’s been tooling on the microblog these last few weeks, pondered in his column today how it should best be used:

He then asked Evan Williams (at ev), the founder of the over-heated microblog, his thoughts. Williams said they’re all wrong, and Pogue deduced this to mean that they’re all right, and thus titled his column “Twitter is What You Make It.”

But does this mean that the PRotectors of reputations shouldn’t proceed with caution? Last night I tweeted a link to a post on TPM, which revealed how the Virginia GOP chairman’s careless use of the microblog probably cost his party a voting majority in the state Senate.

And then today, Converseon‘s Rob Key shared his colleague Christin Eubanks link to a story recounting how a reporter for Canada’s National Post had a very public Twitter melt down with a PR person who used Twitter to out her spat with the reporter. Here’s part of the reporter’s Twetort:

sirdavid: @aprildunford what the fuck. I called you for comment two days ago. What did you expect when you called me back? Donâ€™t post that shit online

sirdavid: @aprildunford furthermore, I called you several times in the afternoon. Donâ€™t be condescending to me when I actually wanted to talk to you

Lesson learned: Twitter may be “what you make it,” but discretion still applies. Or as Converseon’s Eubanks astutely noted:

[This is] “Another example of how [passive] aggression on twitter â€“ even when no names are called out â€“ can ruin relationships and reputations. In this case it was a reporter vs. a marketing professional, and both ended up making public asses of themselves. This is an extreme case but itâ€™s certainly a good reminder to think before you tweet and save the private/controversial/inflammatory comments for more private conversation venues.”