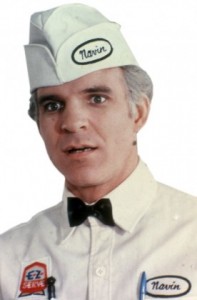 Who hasn’t come to the conclusion that digital video – whether delivered to your desktop, laptop, PDA or cell phone — is entering a Renaissance? Was it that proclamation from NBCUni’s digital honcho Beth Comstock who, as a former communications pro, inspires PR types everywhere:

â€œVideo has been liberated” [from the TV set].

I had mentioned in a tweet last week that I was “invited” to participate in a “private beta” test of Hulu.com, NBCUni and NewsCorp’s much-heralded entry into the YouTube-killing category. Sure, me and millions of others.

I do however like the service. It’s got a clean GUI, and the resolution of the videos, full-screen included, is excellent. (But then again, it could be my new 20″ iMac.) The selection, however, was relatively sparse, but episodes of “The Office” and “Family Guy,” pleased my 15-year-old. I was sucked in by one of my all-time favorite flicks, Steve Martin’s “The Jerk.” The content offering is sure to grow.

In grazing some of the digitally minded media sites this morning, a number of cool-sounding (or at least cool-sounding in the eyes of their corporate branding specialists), stealthy big-branded-backed video hosting sites surfaced. Among them:

VBS.TV – Then there was The Times profile of the grittier VBS.TV, in which MTV/Viacom is an investor. Tom, is this the boat you allegedly missed?

Current.TV – The AP reports that Al Gore will be honored at the International Emmy Awards. Current.TV, also one of my faves, figures quite favorably.

Crackle – I caught ClickZ’s report on SONY’s Crackle, formerly knows as Grouper, in which the video site’s efforts to line-up advertising bode well for the re-made site.

I can’t keep up, and I didn’t even check out NewTeeVee. Life was once so simple, Rocketbottom, Blip.TV, and Revver.