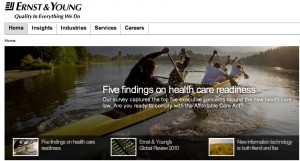 Late yesterday, a buddy in the PR biz who’s worked with many accounting firms over his career drew my attention to the Wall Street Journal story on the civil suit against Ernst & Young, Lehman Bros’ auditor.

The Journal piece posted on the site late yesterday afternoon, but the news leaked into the public domain at least a day earlier.

My friend thought it most unusual that E&Y had yet to publicly respond to these charges. (It since has.) I mean given all the scrutiny and scorn directed at the financial services industry these last two years, could these companies still be mired in bureaucracy, or worse, complacency when faced with a fast-developing story? (And aren’t they all fast-developing nowadays?)

The idea prompted me to pop out this tweet:

@peterhimler Will Ernst & Young’s silence help or hurt the accounting firm in the court of public opinion?
19 hours ago

I started thinking that perhaps Christmas Week combined with the news media’s fragmentation and its ephemeral nature let Ernst & Young off the hook. Maybe this story would simply disappear as quickly as it arrived?

The company, and its astute communications chief Charlie Perkins (whom I know and like), had no such thoughts. E&Y had too many stakeholders and too high profile a former client to remain silent. The company’s position ultimately appeared in The Journal‘s rewrite of the story:

“Ernst & Young said in a statement that there was “no factual or legal basis” to bring a claim against the firm, and that it would vigorously defend against the claims in Mr. Cuomo’s lawsuit. Lehman’s accounting was in accordance with generally accepted accounting principles, Ernst said, and Lehman’s bankruptcy “was not caused by any accounting issues.”

Separately in the same news cycle, we learned of Deutsche Bank’s half-billion dollar+ legal settlement for some questionable tax shelters it foisted on its customers.

A visit to the both companies’ websites, however, found not a mention of these page-one stories on their respective home pages. One had to drill down to their Newsroom’s news release sections to learn something from the company. Here’s what we found at E&Y and at Deutsche.

Still, the question intrigues: how prominent of a position should a company take in response to a negative story when the nature of today’s news media allows a story to more quickly dissipate than ever before — even without a prominent public retort. In fact, couldn’t a high profile response give these stories undesired media legs they might not have had otherwise?