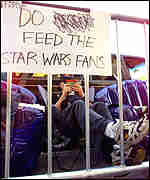 Whenever the purveyor of a new product or service can involve the consumer in its marketing, the prospects for generating news coverage are that much greater. It could be the local casting call for the next “American Idol,” the introduction of “Halo 2”, or what we’re witnessing this morning: multitudes of fans lining up to be the first to see the final episode of Star Wars.” Virtually every local TV news program and newspaper in the country, if not the world, coveredthis phenomenon in the days leading up to the film’s debut. Add to it the premiere event at New York’s Ziegfeld Theare, the critical reviews, interviews with the stars, leaks of the film’s trailers and an online buzz campaign, and it spells big big box office.