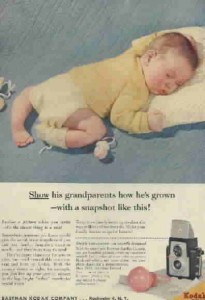 That was the reported final price on the bizarre bidding process for images from the custom photo shoot of Baby Brangelina, or “the second coming,” as some have noted.

Apparently, the key photo editors were asked to gather late Saturday night at Getty’s un-airconditioned downtown NY offices where they were offered the honor to peruse the pics in separate rooms. (Geesh. If you’ve seen one baby pic, haven’t you seen them all?) Bids were due Sunday morning at 6:00. Page Six reports that TIME’s Inc’s People prevailed, but that’s fodder for another posting.

I was actually smitten by the weird dance Angelina and Brad put these pubs through. Some will say that it’s less crass than some celebrity glossy funding a wedding, since the couple will donate to charity the money paid by these sometimes journalistic enterprises.

Personally, I find it super tacky to auction your child’s photos to the highest bidder for any reason – charity or otherwise. I mean doesn’t the $10-15 million Angelina (and likely Brad) receive per picture more than cover their philanthropic endeavors? Maybe I’m just old fashioned. This sounds more like revenge for surviving the pesky paparazzi on whose backs these publications thrive. Hello?