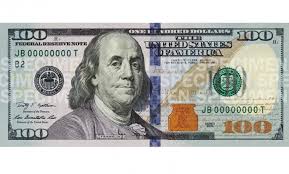 David Wolman of The New Yorker takes a look at the reasons behind the two-year delay in the introduction of the re-designed $100 bill. Apparently, the Bureau of Engraving and Printing, or BEP, as it’s known in the Beltway, has some issues with bleeding ink.

“The cause of the latest blunder is something known as â€œmashing,â€ according to Darlene Anderson, a spokeswoman for the bureau. When too much ink is applied to the paper, the lines of the artwork arenâ€™t as crisp as they should be, like when a kid tries to carefully color inside the linesâ€”using watercolors and a fat paintbrush.”

Did you know that the $100 is the most counterfeited of all the U.S. currency denominations. I remember my first exposure to the BEP and U.S. Treasury at a time when they were poised to introduce the first re-design of the $100 bill in an effort to thwart counterfeiting.

I was summoned to an agency brainstorm session, albeit a bit too late. The PR strategy already was set in stone. I was still asked to offer some direction on how best to maximize (a popular PR cÌ¶lÌ¶iÌ¶cÌ¶hÌ¶eÌ¶ Ì¶ term) media attendance for the launch. The account team planned an event featuring Robert Rubin, Secretary of the U.S. Treasury, Alan Greenspan, head of the U.S. Federal Reserve Bank and a few others to be held at the offices of the Federal Reserve Bank of New York in the financial district.

Did they even need to deploy any more assets than Secretary Rubin and Chairman Greenspan to draw a respectable number of journalists? I thought not, but I was soon overruled. Someone figured it would be a novel idea to invite a group of local high students to prop it up. These students were studying the U.S. currency, and the plan was to have the presser resemble a classroom wherein an official for the Fed would walk the students through the specific design changes and reasons therefore.

As is my nature, I was not about to be “led down the road to Abilene,” i.e., stay silent and accept the consequences of an ill-conceived strategy. I gently suggested that the schoolroom fabrication was not really necessary. The re-design of the U.S. currency, in and of itself, was inherently newsworthy. Simply ask the Treasury Secretary or Fed Chief to hold up the bill and explain the changes. It was the quintessential photo-op.

I was overruled. Apparently, I was told, Secretary Rubin was personally wealthy and for him to hold up a $100 bill was not the preferred event take-away. Okayyyy.

The big day arrived. We drew about a half dozen TV crews, about the same number of still photographers, and a couple dozen reporters. The room was set-up classroom style. About 20 students were seated in rows facing the podium. The lesson began.

About ten minutes into the tutorial, New York Post photographer Mike Norcia beckoned me over: “Peter, can you ask the Secretary to hold up the new bill?” I paused and said that I really can’t, but that that shouldn’t prevent him from doing so. “Mr. Secretary, Mr. Secretary,” Norcia gestured. “Would you mind holding up the new bill?” To his credit, Secretary Rubin was more than happy to oblige.

That image went around the world, and not a single mention of Mr. Rubin’s personal wealth. Incidentally, our then client Malcolm Carter, whom I knew as an Associated Press arts writer in the early days of my career, also picked up on the currency re-design. He weighed in here.

We went on to debut the re-designed $50 for which U.S. Treasurer Mary Ellen Withrow used some of the new bills to purchase tickets for the Christmas Spectacular at Radio City Music Hall.

She then crossed the street, opposite the Music Hall marquee, which read “New $50 Bill Today,” and affixed her signature (alongside her printed name) to passers-by coming up with $50 in cash to exchange. The line stretched down the block.