In a cross between Elaine Benes dancing and Sydney Leathers doing whatever she does, Miley Cyrus suddenly resurrected her celebrity status at Thursday night’s VMA Awards — for better or worse. Ms. Cyrus’s rÌ¶aÌ¶uÌ¶nÌ¶cÌ¶hÌ¶yÌ¶ twerky performance shocked and awed her way back onto America’s lips and fingertips, usurping Lady Gaga as the entertainer who’ll do just about anything to gin up a little buzz.

And what better narrative than the counterintuitive contrast between the wholesome Hannah Montana and the awkwardly gyrating Cyrus feigning getting butt-f***ed on stage as millions watched? 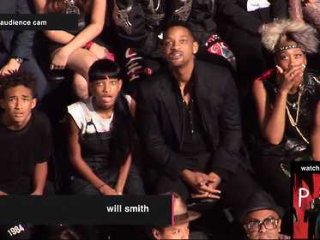 More than a few eyebrows were raised. Canada’s National Post summed up the reactions pretty neatly in this round-up wherein, btw, they pointed out that Will Smith and family were actually reacting to Ms. Gaga’s performance, not Ms. Cyrus’s as the Twitterverse wrongfully streamcasted.

The biggest challenge we face today as marketing and brand communicators is how to break through the cacophony of mainstream and social media clutter.  Too much information from too many sources demands serious risk-taking.  The context and positioning of the brand has taken a back seat to nefarious schemes that win the affections of an all too complicit media.

The requirement to raise eyebrows is not relegated to the world of celebrity. Video producers of branded content know all too well what boundaries must be crossed to draw eyeballs and create buzz. A quick look at any of the Axe body spray ads on YouTube will give you a good idea. On the other hand, a brand like Oreo generated 4.8 million+ YouTube views for its cleverly executed video featuring a Rube Goldberg-like cookie separation machine.  And to think…no raunch needed.