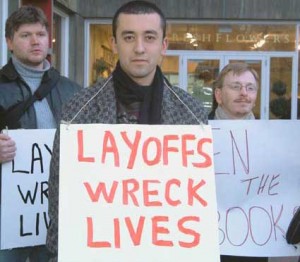 I finally got around to reading (my collector’s edition of) The New York Times late yesterday. I gleefully waded through the election coverage to eventually find SF-based tech reporter’s Claire Cane Miller’s piece on layoff rumors in the age of Twitter. Before I go there, wasn’t yesterday a glorious day!?

I wonder if an Obama administration will provide as much PR fodder for this blog as the Bushies? Doubtful, though we’ll definitely keep an eye on how the groundswell is put to use once President Obama shifts into gear.

Also, did you hear about the lines that formed around The Times’s Eighth Avenue headquarters in NYC where demand for the November 5 edition outstripped newsstand supply? Long live the newspaper!

OK So here’s the deal on the piece about layoffs in the age of Twitter. The premise was that when layoff rumors surface online — true or untrue — the employer must go public ASAP to set the record straight. And what more expeditious way to do this than through a blog post from high up. From Ms. Cain Miller:

“Companies feel pressure to break bad news on their own blogs so that they can better control the message. However, experts in human resources and public relations say it is only a matter of time before companies of all sizes and in all industries will feel compelled to blog about painful news.”

Wrong. No one will argue about the downside of downsizing, and specifically when employees first learn about it through the media, blogs among them. But knee-jerking with an oh-so-public response is not the way to go.

Rather than post to world, senior management must first directly and genuinely engage the employee base, linking to and correcting the online conjecture. E-mail, text, phone, in-person meeting, or any internal channel should suffice. It’s less a function of command-and-controlling the news as it is one of decency and corporate culture.

Invariably that internal missive will find its way into the public domain, in effect, killing two birds with one stone. The value of blogging about a layoff accouncemnt lies in its inherent transparency, but also in its ability to provide an outlet for diaogue.

“The demand for transparency has forced small start-ups to act like public companies, he said. At the same time, ‘it makes private companies much more accountable to the people they retain and who leave, and thatâ€™s probably a good thing,’ Mr. Kelman said.”