In their zeal that led up to the shuttering of the U.S. government, House Republicans believed they had this President right where they wanted him. So much so, they expanded their list of demands to include an array of partisan issues, some of which they reasoned might actually fall in their favor.

The public uproar was so loud that the GOP quickly withdrew its ransom demands and stuck to a few core items, e.g., a year delay of ACA and the elimination of a tariff on medical device companies. One of the many GOP demands that fell by the wayside was the KeystoneXL Pipeline. Republicans insisted that it be approved and construction begin immediately, or else.

I can’t get my arms around this pipeline. I understand that the Canadian government is lobbying furiously to get it built. On the other hand, I’ve heard credible people insist that the number of permanent jobs it will create is minuscule, while the environmental impact of transporting tar sands oil through America’s heartland is anything but.

Be that as it may, the company hoping to build the pipeline, without much promise, TransCanada Corp. has a sister project in the works called the Energy East pipeline, which would bring over a million barrels of Tar Sands oil to the East Coast for export, primarily to Europe and Asia.

To prevail in the court of public opinion, the company organized a series of town meetings across Canada. What it didn’t expect were the aggressive, if not duplicitous tactics of those opposed to the initiative.  I received a news release from a quasi activist/PR organization called the Yes Lab, which describes itself as:

“…a series of brainstorms and trainings to help activist groups carry out media-getting creative actions, focused on their own campaign goals. It’s a way for social justice organizations to take advantage of all that we Yes Men have learned-not only about our own ways of doing things, but those we’ve come in contact with over the decade and a half we’ve been doing this sort of thing. The Yes Lab has offices and workshopping space at NYU’s Hemispheric Institute in New York.”

Now I love a good brainstorm as much as any self-respecting PR professional. I also recognize that today’s diluted media ecosystem, along with markedly changed media consumption habits, demand that risks be taken to make one’s mark. (Clearly someone told this to Miley Cyrus before she took the stage at this year’s VMA’s.)

Just as Miley literally refashioned herself as a twerky slut, the activists from SaveCanada are fighting TransCanada’s grassroots constituency-building “consultation” campaign by refashioning themselves as…friendly TransCanada employees. Here’s how the YesLab described SaveCanada’s clever effort: 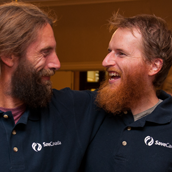 “To outwit this latest ploy by TransCanada, local activists all along the pipeline route have been swarming these events dressed just like TransCanada reps, but with lookalike “SaveCanada” name tags and brochures. Instead of promoting the pipeline, the SaveCanada reps communicate risks.

Again, I acknowledge that boundaries need to be pushed in order to prevail in today’s real-time and ephemeral news environment. Still I wonder whether doing so under false pretenses crosses an ethical line. Hey, didn’t Wal-Mart dispatch a PR rep to a union meeting posing as a reporter? I suppose it works both ways.