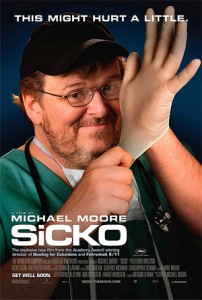 Some of the early coverage of Michael Moore’s latest docu-film “Sicko,” which the filmmaker screened in Cannes over the weekend, has begun to wash ashore. The early buzz is pretty good, but I’m sure the media tsunami will reach a crescendo as we approach the June 29 opening.

This blogger posted on it just about two years ago at a time when big pharma and the big health insurers were gearing up to do battle. In fact, I know of one drug company that prescribed an entire unit to keep tabs on what was expected to be a scathing indictment of the industry. The AMC blog reports that the film is “kinder and gentler” than what was anticipated.

“To ride the Cannes momentum ahead of the filmâ€™s United States release, the team plans to start running newspaper advertisements superimposing health insurer logos on tombstones and to use the Web to solicit whistle-blowers from the ranks of insurance company employees.”

What struck me as PR-noteworthy was one industry group’s initial response to the film:

“‘If the movie results in members of Congress and governors putting this issue squarely on the table as the No. 1 priority, we will be part of that discussion and will welcome it,’ said Karen Ignagni, president of Americaâ€™s Health Insurance Plans, a trade group in Washington.”

Smart, Karen. Perhaps Michael Moore’s less-than-shrill approach this go-round will produce as a side effect, dialogue, and…change? Ms. Ignagni strikes the right chord by refusing to condemn this film and its famously caustic filmmaker on an issue that few in this country will argue doesn’t need a strong dose of medication, if not a defibrillator.