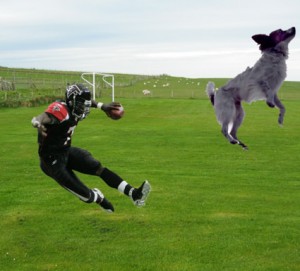 I’ve always admired PETA. No, I’m not an animal activist or anything. I just felt that the group’s audacity was very effective in creating headlines.

Who can forget all the blood those wayward animal lovers tossed at public figures (Harold Burson among them) or the perennial disdain they had for the fashion set.

It was almost as if this NGO would do anything to grab some ink and airtime. Well, today, it appears to have come to that.

In a pitting of strange bedfellows, we have one one side of the ring a group desperate for the drug of choice among the advocacy set — media coverage — and on the other, a fallen sports star desperate for any road out of his Kafkaesque nightmare.

Yes, folks, it’s a win-win: PETA is courting pit-bull oddsmaker Michael Vick as a spokesperson in a possible PR campaign. (No, you can’t make this stuff up.)

“The requirement from us would have to be extremely strong language,” [PETA president] Newkirk said. “It would have to include Michael Vick saying, ‘We’ve lost everything, and you would, too.'”

In either case, it’s not as incongruous as it all sounds. PETA would be thrust back into the media limelight — something it craves — and Mr. Vick, well Mr. Vick has few options to once and for all demonstrate contrition to restore some respect. He’s like a dog without a bone. It’s a good match-up. Now what are the odds it’ll actually come off?