OMG! “Hewlett Took a P.R. Firmâ€™s Advice in the Hurd Case” blares the headline on the business pages of today’s New York Times. No s**t, Sherlock! Of course, the company and its board sought counsel from an established public relations firm. To whom should they have turned? A priest?

The piece went on to question the agency’s credentials to handle such matters. Trust me, APCO is no fly-by-night agency. While Times SF-based technology reporters Ashlee Vance and Matt Richtel may not be as familiar with the firm, APCO certainly owns its share of pertinent credentials to advise HP’s board. From The Times:

“According to a person briefed on the presentation, the representative from the APCO public relations firm even wrote a mock sensational newspaper article to demonstrate what would happen if news leaked. The specialist said the company would be better served by full disclosure, even though an investigation had produced no evidence of sexual misconduct.”

Perhaps one of the Valley’s myriad social media specialty boutiques would have been better equipped to advise the company? Doubtful.

Still, the decision to request Mr. Hurd’s resignation may or may not have been the correct one. Would the story have had greater media legs and caused more pain to HP had Mr. Hurd stayed on to endure Gloria Allred’s self-aggrandizing brand of reputation deconstruction? It’s not an easy question to answer.

In crises, decisions are made based on the information available at the time. Every crisis is distinct. There is no set playbook. You go with what you know, even though, a different set of circumstances may manifest later. Oracle chief Larry Ellison, no stranger himself to corporate excess, weighed in on Mr. Hurd’s side:

“What the expense fraud claims do reveal is an H.P. board desperately grasping at straws in trying to publicly explain the unexplainable; how a false sexual harassment claim and some petty expense report errors led to the loss of one of Silicon Valleyâ€™s best and most respected leaders.”

While Jeffrey Sonnenfeld, “an expert in corporate governance and senior associate dean at the Yale School of Management, said Hewlett-Packardâ€™s directors deserved credit.”

“The company ‘stands apart from other companies that have been scandalized in the headlines this year,’ he said, referring to BP and several Wall Street firms. ‘They made a courageous call.'”

The Business Insider’s Henry Blodget, who himself lived through a forced resignation, provides his insightful take on the HP imbroglio today in which he concludes

“…the details leave big questions as to what really happened.” 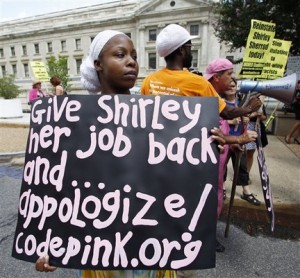 If the company had truly erred in its understanding of the allegations and went ahead to demand Mr. Hurd’s resignation, maybe it should now consider reinstating him as CEO? Didn’t the Obama Administration recently have the kahunas to admit that it had over-reacted to a trumped up (eg, patently false) report about one of its administrators?

Then again if the initial (and expected) Friday-issued bad news announcement had focused instead on the financial improprieties of Mr. Hurd’s expense report, and not on the now dubious sexual harassment allegations, the mediasphere would not be in a frenzy to pick apart HP’s (and its PR firm’s) decision.

But again, you go with the cards you’re dealt, and hope you prevail.