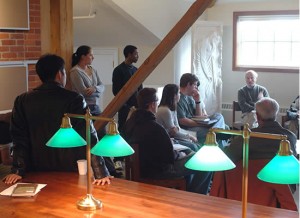 A week or so ago, I received an e-mail from my son’s college announcing the results of an exhaustive study, speerheaded by the college president, to address, among other things, what he and others concluded to be the inequitable access by smart, but economically disadvantaged students to an education at the nation’s most selective colleges and universities.

I read the report and was taken by its passion and the profound changes it portended if administered. I filed it away and soon forgot about it.

If anyone had questions about the virility of the mainstream media to raise public consciousness and effect change, the new issue of Business Week contains a special report on this bold and controversial initiative sought by Amherst College president Tony Marx. The school’s unofficial community website The Daily Jolt is abuzz with animated, if not overly personal debate, and soon students, faculty and administrators from the nation’s higher education arena undoubtedly will join the fray.

Could this issue have caught fire to the degree it has and will without Business Week serving as “the tipping point?” What’s even more astounding to me is that a search today (Sunday) for Amherst College on Technorati yields not a single posting on this incendiary debate. Perhaps college students are too busy to blog, and what does this mean for blogging’s next generation? Whatever the future holds, I know not to write-off the mainstream media just yet.