“More than half the economy has NOT been disrupted by the Internet.”

Presumably he was talking about innovation in sectors that have been slow to embrace IT and its potential to enhance business processes and prospects, i.e., healthcare, financial services, etc. At the December New York Tech Meetup, several of the presentations reminded me of Steve Case’s comments.

Leave it to Jessica and Nate to pull a few surprises for the 800+ live attendees at NYU’s Skirball Auditorium and scores more via webstream at New Work City. The first was a live and remote appearance by New York City’s digital doyenne Rachel Haot and her supreme boss Mayor Mike, respectively. Here’s a (hand-held) video clip: 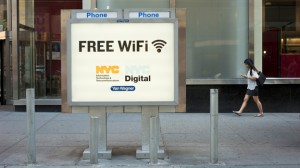 I actually thought that many had already been converted into wi-fi hotspots, but I guess I was mistaken. Personally, I think that it would be great, and speak volumes about the city, if every phone booth was equipped with VOIP to allow passers-by to make FREE one-minute voice or video calls to family or friends anywhere in the world. Sure, the booths could be equipped with ad-supported, Foursquare-fueled interactive Google Maps, but the free connectivity bridges the old and the new, IMHO.

Moving on, there were other non-traditional surprises that showcased the December New York Tech Meetup. Two in particular caught my eye. The first was called Luci, and it does for those in the world lacking electricity (and light) what charity: water does for those lacking potable water.

Luci provides renewable light via an ingeniously-designed solar-powered, inflatable lantern. Take a look at the lightless voids in this newly released NASA image of Earth at night, and then contemplate the need Luci’s creators at MPOWERD aspire to meet: 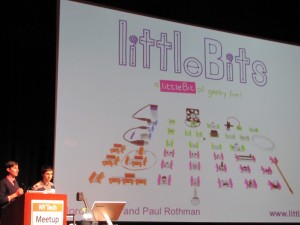 I was also taken by a company called littleBits, which is building an opensource library of electronic modules that snap together with magnets – a kind of Legos for the future wired set. The difference of course lies in how, through creative play, users are taught the fundamentals of circuitry.  You mean the Erector Set and that chemistry set no longer are valid teaching toys/tools?

In its mission, littleBits seeks to “create the next generation of problem-solvers, and interventions need to occur early. The time is ripe to create the pipe cleaner and the popsicle stick of the 21st century.” What makes it diferent is open source, i.e., “…building a community of contributors who experiment, share online, and learn from each otherâ€™s creativity. Its designs are publicly available so that anyone can see and use them.”

Other than these presenters bridging the physical world and virtual worlds, NYTM had more than its share of other compelling startups who succeeded in using their five minutes on stage to woo the discerning audience of New York technofiles.  Among those that this attendee especially liked: Glide, a platform for seamlessly accessing one’s files that’s device and OS agnostic; Punch, a platform, now in beta, that makes app creation easy;  rvl, a tool that let’s one “author, present and share beautiful presentations,” right in the browser.

The next NYTM is slated for January 8. Tickets are available on a first come, first served basis …but you need to first join the group to be alerted.