Now this is becoming a regular gig. I was one of the fortunate few (800 +/-) who landed a seat at the monthly New York Tech Meetup. For those who haven’t attended one of these events, I strongly recommend joining this vibrant community of 17,300 that was formed in 2004 and I believe today is the largest of all the Meetup community organizations.

As a member, you’ll be kept apprised of the group’s various activities, including its always sold-out monthly showcase for startups, and be able to tap the community’s expertise through its active bulletin board. More importantly, for PR pros, you’ll be in a position to help many ingenious New York tech startups gain the recognition they want and deserve. They may have VC money and legal advice, but it’s PR and marketing acumen that’s sorely needed from what I can tell.

The month’s range of presenters included Hack NY winners ETSY.TV, which adapted for television (Boxee and Google TV) the popular, home-grown e-commerce site whose stated mission is “…to enable people to make a living making things, and to reconnect makers with buyers.” Rather than my trying to describe it, watch their demo:

Next up was another Hack NY winner whose (anti-social?) application helps users identify those whose social profiles make them ripe for an ass-kicking. Aptly called “Come @ Me Bro,” the developer uses one’s taste in movies to determine the match-ups. As someone whose fave films are “Risky Business,” “Ferris Bueller,” and “It’s A Wonderful Life,” I (unfortunately) was one of three people in the audience selected whose taste in films deemed me fight-worthy. Go figure. (I thought it best not to raise my hand.)

The audience was then treated to a presentation by Uber, which just that morning had its New York coming out via a Jenna Wortham feature story in The New York Times. Uber has armed private car fleets with mobile technology that will allow them to quickly respond to a passenger in need of a ride. One text and the pre-registered (with credit card) passenger can tap one of the “300 cars in NYC” that Uber has thus far signed on. 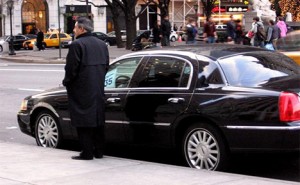 It costs about 50 percent more than a standard cab fare, according to Charlie who I ran into in the lobby following the event. (The seed stage VC firm for which he works is one of the investors.) Hey, if you’re stranded between taxi shifts, and late for a meeting, paying a little extra is probably worth it (except perhaps if you’re Arrington).

Other startups I liked included:

Clique, an invitation-only, socially driven matchmaking service that brings out the “Gladwellian connector” instincts in all of us:

RezScore, a free resume evaluation service that grades your CV and offers specific areas for improvement. (They ran my CV through the mill and it earned a respectable B+ — not that I’m in the job market.)

Jason Schwartz’s Matchbook, which makes it easy to bookmark your fave restaurants, shops, etc. It’s sort of like Yelp meets Evernote. It’s available for download in the iTunes Store.

ShoutEm – As the world goes mobile, it will be extremely useful to have the means to easily create native apps for the iPhone and Android O/S without the sometimes arcane skill sets of a coder. 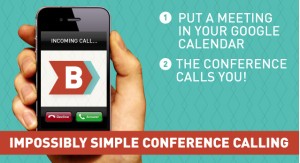 Finally, I liked the Hack of the Month – Bridg.me. How many times have you missed those conference calls on your calendar — even if you set it up for a 15-minute advance alert? This app actually reaches out and connects me to my conference calls skedded on my Google Calendar app. Nice.

Hope to see you at the next NY Tech Meetup on June 7 (assuming the Personal Democracy Forum can clear out of Skirball in time). Andrew?