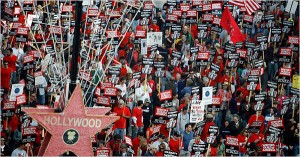 To ensure attendance, the scribes at the Hollywood Foreign Press Association have cancelled the nationally telecast Golden Globes fashion show and replaced it with…a news conference. In so doing, they hope to thwart any disruptive protests by the WGA. The left coast’s PR machin(ists) even took sides:

“In an unusual lobbying effort, a dozen Hollywood publicity agencies â€” including 42 West, ID, PMK/HBH and Rogers & Cowan â€” joined in sending a letter to Jeff Zucker, chief executive of NBC Universal, saying that their clients would not cross picket lines to attend the Golden Globes.”

So we’re now saddled with a news conference. Yet certain physical elements are required for a successful (i.e., well-attended) one. It’ll likely take more than Association president Jorge Camara reading from the podium to extricate increasingly sedentary scribes from their multimedia entertainment centers, I mean desktops.

“Other than a clutch of media types, there will be no live audience for the Golden Globes. The format is designed to side-step the need for written presentations, presumably removing the event from the jurisdiction of the striking Writers Guild of America West and eliminating the prospect of pickets.”

Let’s start with enlisting a face-recognizable A or even B-lister to turn out the paparazzi. The Tony Awards nominating committee has this one down pat for its nominee presser. Then there are props, and I’m not talking Armani, Versace or Mark Jacobs. Silly me, the celebs themselves are the props. Nuf said bout that.

However mundane it sounds, the GG awards news conference should attract a fair share of media coverage, propelled by the nominees’ press reps. Still, the organizers could save themselves a heap a money by staging an interactive webcast, complete with A-lister virtual “appearances,” sound bites, films clips, etc. (Second Life anyone?)

This digital, and more media-conducive approach offers the elements needed to produce a richer story than the one perhaps gleaned by trudging over to some non-descript room configured theatre-style with a riser and mult-box to hear from a talking head. What’s more, how can the WGA picket a webcast?