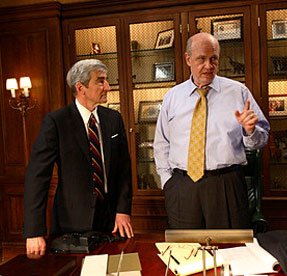 So whose great idea was it to bring in a former lawyer, I mean a former district attorney, to take over the PR reins at CNBC? (I mean would you vote for Fred or Rudy as President?) Maybe the content-sharing deal with News Corp-owned Dow Jones is headed into litigious waters?

All I know is that the current holder of the VP/PR position is as close to central casting as one could find. He’s a former journalst with Newsday, Variety and the Wall Street Journal (where he derided his fair share of publicity hounds). He also toiled alongside me at Burson–Marsteller before heading over to the client side of the PR business.

When the NBC gig arose, he was like a pig ‘n…well you know. He found his higher calling. Glad to hear he’s staying on to head media relations, but scratching my head on the creds his new boss brings to the party.