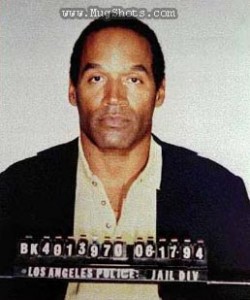 Sounds like a law firm. True to the pendulum theory of fame in the 21st century, these three souls have dumbfoundedly re-emerged this week to give the tabloids and tabloid shows their raison d’etre.

The most bizarro resurrection — as if anything could top a ghastly and ghostly-looking Mr. Jackson tooling around London’s nightspots — has O.J. Simpson poised to discuss his new book If I Did It. He’s taped a two-parter on the one network that’s bound to give him fair and balanced treatment.

How did this deal get bound? I guess the quid pro quo entailed having the book’s publisher herself conduct the interview. This is journalism?

The bigger enigma remains: what the heck is going through this man’s head? I certainly don’t remember reading anywhere that he fired his long-time publicist and hired his sister to restore his strategically forgotten image. What can he gain by this tasteless public performance (versus what can he lose)?

In an age when we are treated to the most ill-conceived celebrity behavior — hey let’s get married before I bury my dead son — we are ambushed by three of America’s Most Notorious: a presumed murderer, an acquitted but admitted pedophile, and a segregationist . I hope for Jeb’s sake that Mr. Lott’s anointment does not portend what lies ahead for the GOP.

Back to Mr. Simpson. Maybe his Frey-like tome should only be sold in Second Life. And then maybe he’ll be re-tried there as well.