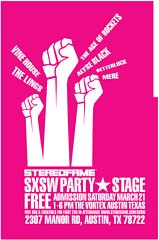 I kinda wish I was in Austin mixing it up with the social media set at #SXSW, but here I am in Miami with my #1 son stealing a couple of rounds. My Dell 5150 finally croaked, so I’m on the hotel’s computer trying to catch up. (My Blackberry’s mobile Twitter feed only goes so far.)

I stopped by PR Newser to discover the prognostications of some great prognosticators (and SMFs) Brian Solis and Peter Shankman who waxed on the future of PR. Will agencies become irrelevant? Will the press release wither away? Will the new breed of social media strategists usurp the leading role traditional PR’ists have played with clients in need? From PR Newser:

“‘The bottom line, said Solis when asked about what will be the business model for PR in the future: We’re not charging to write press releases or for media campaigns anymore,’ he said. Indeed, those functions will still exist, but they are becoming an increasingly smaller part of the pie.“

The bigger issue, in my mind, has more to do with identifying and nurturing the PR competencies that remain relevant in the new social media marketing order. Sure, drafting and “placing” news releases with MSM has lost its luster (and effectiveness). Be that as it may, clients still look to agencies and counselors to bring to life their news and point-of-views in the expanding “media” and social media spheres. Right?

This goal hasn’t changed, though the means to it certainly has. More importantly, the skill to cogently and convincingly communicate a client’s perspective, coupled with a working knowledge of the evolved universe where that POV can flourish, remains valid – even to this day.