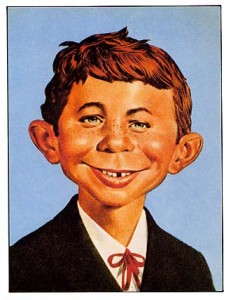 I don’t remember the last time I picked up a copy of Cracked magazine. But then again, what me worry that I barely recall Cracked nemesis Alfred E. Neuman (at least until our 43rd president assumed his persona).

I was tooling around today on the PopUrls site and came across this pertinent-to-PR-peeps post via Cracked.com:

In it, the beta site highlights nine case studies that some of the world’s most vaunted consumer brands probably wished had never made it out of the creative session. They include:

Having a presence in the social sphere means diddly squat without that little extra to create tension, edge. I mean isn’t controversy the elusive ingredient that can propel a campaign to viral nirvana? With this in mind, one has to give these marketers some credit for pushing the envelope — even though the envelope they pushed was in truly bad taste.