I recently started writing for Ev and Biz’s new site Medium to complement my seven-year-old PR/media/tech-focused blog The Flack and musings on Forbes.com and Bulldog Reporter. But I wanted to do something a little different for Medium. I wanted to explore a topic in which I had first-hand experience that would also resonate with other potential contributors. Medium’s model encourages others with shared experiences to contribute to your “category.”

I created a category called “Adventures in Consumer Technology,” which looks at the every day annoyances entrepreneurs and small business owners face in navigating their increasingly digital lives. In others words: “No More IT Department? You’re Now On Your Own” to grapple with the tech tools on which you’ve grown hopelessly dependent to manage your life.

One of the earlier posts described the impossibly difficult task to discover just the right app or piece of software needed to solve the immediate problem.  I learned that no matter how digitally engaged you might be, no one is omniscient, especially the search engines in the app store or on your browser. I concluded that a human concierge, steeped in the subject matter at hand, is what we all could use

I later wrote about a trio of music-streaming and discovery apps and the differences approaches they take to help users find tunes they like. I kind of knew there were a handful of others out there, but didn’t realize how many until Pando Daily’s Erin Griffiths chimed in. In her post yesterday, she wrote that digital music consumers today:

“increasingly split their time between the buffet of listening options, including Spotify, Pandora, YouTube, iHeartRadio, Songza, MOG, Rdio, Slacker, Jelli, Deezer, Thefuture.fm, Hype Machine, Just Hear It, Radionomy, This Is My Jam, Hulkshare, Soundtracker, and eventually Appleâ€™s iRadio and whatever streaming service Google/YouTube is cooking up.” 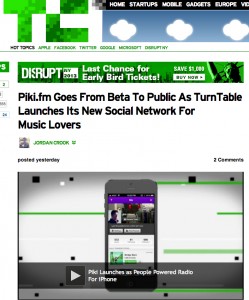 Yikes. And I bet she even missed a few. Her piece was about Piki, which was started by one of the founders of Turntable.fm, a former favorite of this music buff.  In it, she alludes to the “hype cycle” that Turntable.fm (and so many once-hot startups) invariably endure, before they pivot, and perhaps pivot again.

“But, as VCâ€™s like to tell their hottest portfolio companies: Beware the two-sided hype cycle â€” the higher you fly, the further youâ€™re going to fall on the other side,” she writes.

I’ve touched on this theme in previous PR posts with the added idea that the reverse also holds true. How soon we forget how low Alec Baldwin or Michael Vick had fallen, only to rise to new heights? Still, for tech startups, it’s less a matter of flying high and falling low — though Foursquare may still follow this paradigm — and more about getting that initial hype then gradually fading away.

Lots of tech startups get their first “TechCrunch bump” from a multi-million dollar funding round, followed a short while later by another spate of tech enthusiast media buzz as the product launches.  What happens next is less a precipitous fall, as much as a slow fade. Of course, new consumer-facing technologies with boffo pedigrees like Vine (Twitter), Instagram (Facebook), Android (Google), and others can readily leverage their parentage to maintain a high media profile. (We see this also with startups that reside in portfolios of highly media-connected VCs.)

Most others, however, have to work extra hard to keep it fresh.  They need to continually innovate and, as importantly, effectively articulate their innovations if they expect to maintain their media mojo.  Brilliant coders churning out cool new products and functions matters little if the wherewithal to gain that media embrace does not exist. Turntable.fm’s Billy Chasen sums it up in the Pando piece:

“The hype cycle is not a cause for abandoning something,â€ Chasen says. It is natural for a bunch of users to check out a service amid a flurry of media fawning and then abandon it. What matters is whether some users stick around, and whether that user base grows. And they have, and it has. The companyâ€™s decision to abandon StickyBits, on the other hand, was obvious. No one was using it, Chasen said. â€œWe built it and we didnâ€™t even use it.â€”

Right. The technology also needs to find (and hopefully grow) an audience. If it has both pedigree and utility, you’ve got it made.