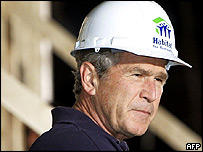 He visited New Orleans on eight separate occasions. He had his picture taken with the National Guard. He donned work clothes and picked up a hammer for Habitat for Humanity. Did these media photo opps help President Bush deflect the criticism of his administration’s lackluster response to Hurricane Katrina? I’m not so sure.

It is therefore surprising that, in spite of his brother accepting responsibility for the slow response to Hurricane Wanda in Florida, the President will travel to the Sunshine State today for yet another photo op. Save the jet fuel!

This may be heresy coming from a career PR’ist, but Mr. Bush, forget the primping and posing for the cameras and do something tangible and substantive that will actually make a difference in the lives of the people affected by these natural disasters. All the photo ops in the world aren’t going to restore electricity or deliver potable water. It may even backlash. Just sample the blogosphere later today to gauge citizen reaction to the staged courting of this key swing state.